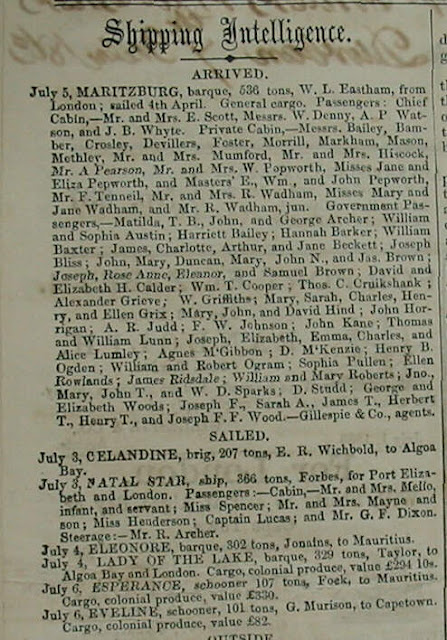 The Natal Mercury of 7 July 1863 announced the arrival at Durban, two days earlier, of the barque Maritzburg, 536 tons, commanded by W L Eastham. She had left London on 4 April. Apart from various paying travellers (including seven members of the Pepworth family) and a general cargo, this ship carried 'Government Passengers' i.e. people emigrating to Natal under the assisted passage scheme. Sometimes such 'steerage' lists are not included in the press report, and may be found in a separate column of the same edition - or, if you're unlucky, not at all.

This particular passenger list obligingly gives most, though not all, first names.

Having established the date of a ship's arrival it's usually worthwhile searching back a few weeks to find mention of her under 'Vessels Expected' in the shipping column. In the case of the Maritzburg, a reference in the 3 July edition reports that she had 'left the Downs' on 31 March. The same report gives her captain's surname as 'Earthian' but Eastham as shown in the arrival entry sounds much more likely - a good example of how names supplied by captain, Port Captain, or ship agent, could be misinterpreted in the press.

Searching forward for more on the Maritzburg, in the Mercury of 10 July we find a brief paragraph in the shape of a testimonial to Captain Eastham and his Officers, 'signed by 67 passengers':

Such testimonials were a feature of the 1860s but later on as arrivals at the port increased this charming practice dwindled and ceased.

So, three reports for the price of one, all within the same month and offering the family historian a bit more than the bare bones of a name on a passenger list.

Note: The Maritzburg was one of J T Rennie's Direct line of clippers, i.e. sailing from the Thames direct to Natal, the first of which to arrive at Durban was L'Imperatrice Eugenie, closely followed by the Prince Alfred, the Tugela, the Natal and Natal Star, the Umgeni, the Quathlamba and others.
Read more about 'The Colonial Clippers' in Basil Lubbock's book of that title.
Posted by Mole at 10:49 AM