Is it just me, or are you also a leetle tired of celebrity genealogy? Been there, done that, torn up the T-shirt?

I’ve watched most of the offerings available either on TV or on DVD, from more obscure productions to ’s massively popular offering – you know the one I mean. And, yes, they do have a hypnotic, even an addictive, attraction.

It depends, I suppose, on how critically you watch the episodes: whether the quality of the research procedures employed stand up to close scrutiny or whether you’re simply riveted by the storyline and don’t mind if the nuts and bolts aren’t screwed down tightly and the conclusion is reached by the magic of television – as seen in cooking programmes where there’s a sample of the day’s recipe ‘made before’ so we can see immediately what the finished product should look like.

I’m not insinuating that these shows are half-baked, far from it. It is evident that a huge amount of research, time, effort – and, of course, money – goes into the writing, directing and polishing of each story. However, the nature of the medium brings its own limitations. It would be impossible to include in an episode of less than an hour every tiny detail discovered during the research stage or to mention all sources consulted. If that were to be attempted viewers might well be nodding off in their armchairs. People want to be entertained. What to leave out and still retain the story’s genealogical credibility must be a daunting juggling act for scriptwriters and editors.

One obvious outcome is that ‘newbies’ – ghastly term - introduced to the world of genealogy via such programmes are left with the impression that everything is easy and they should be able to climb their family tree in no time. They begin their search armed with unrealistic expectations and wonder why the magic doesn’t work for them. There’s much said about the numerous viewers who begin taking an interest in family history because of watching these programmes but is this really the best route into the topic?

There’s no doubt that it is a money-spinner for the media, for professional genealogists involved with the programmes and for other commercial enterprises associated with family history. Whether it is of benefit to the pursuit of genealogy in general, or to the average family historian, is less simple to determine. Isn’t it merely another example of the current dumbing down we’ve already seen in printed genealogy publications where bite-sized bits of information are aimed at readers who are expected to have the attention span of a gnat?

Which brings me back to my initial question: now that the attention of a wider market has been captured by playing the glossily-packaged celebrity card, could we return to real genealogy research? If there’s one thing the latter teaches us, it is that there’s no such thing as an ordinary life – we all have extraordinary ancestors to discover and to share. Let’s celebrate them. 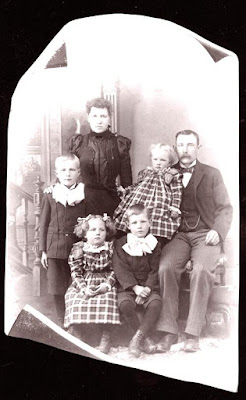 This is a brilliant and relevant post, Mole. Brava!