Wreck of the Drummond Castle June 1896 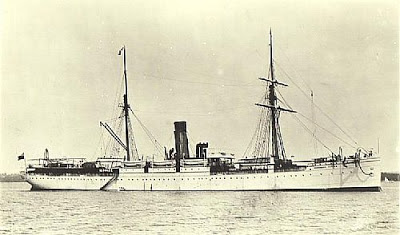 On 28 May 1896 Donald Currie’s Company’s intermediate steamer Drummond Castle, on her way home from Delagoa Bay to England, left Cape Town on what was to be her final journey. A fortnight later she called at Teneriffe. A concert was held in the saloon on the evening of 16 June, most of the passengers going to their cabins afterwards as the deck wasn’t inviting – the sea was calm, but there was a drizzle and poor visibility in the hazy weather.

The ship was approaching Ushant, a locality known to mariners as among the most dangerous in the world, due to strong currents. Nevertheless, the Captain (Pierce) had not reduced speed and neither had soundings been taken. As a result, nobody realised the ship was caught in the treacherous currents and was being pulled in eastward. She struck the reef known as the Pierres Vertes between Ushant and an island to the south. Within a few minutes she had gone to the bottom.

Her sinking was so speedy that accounts of the disaster give little information. A passenger (the only passenger to survive) stated that the Captain believed the ship to be wedged on the rocks and had hesitated about lowering the boats. The Chief Engineer, however, in a heroic decision, raced below to prevent the boilers bursting. Horrified passengers rushed on deck but there was no hope for them or for the stricken ship. Four minutes after the vessel struck she was a mass of floating wreckage.

The following morning, fishermen saw two men clinging to some flotsam – Quartermaster Wood and a seaman, Godbolt – and these were taken on board the fishing vessel and landed on the island of Molene. A passenger, Charles Marquardt, also picked up by fishermen in the vicinity, was landed at Ushant.

These three people were the only survivors of the 243 souls on board the Drummond Castle. Those lost included Captain Pierce and his officers and crew numbering 101 and 142 passengers.

For several days, bodies continued to be washed up on the islands near the scene of the wreck. Many of the victims were buried at once in common graves as there wasn’t enough wood available for so many coffins.

Marquardt had cabled the Currie Company and as soon as the news broke, crowds flocked to the Castle offices in Fenchurch Street, London. Relatives of some of those on board travelled out to the islands near Ushant but all hope of finding further survivors was quickly abandoned.

The South African public was stunned by the news, which impacted directly on almost every town in the country. At the Cape, Parliament adjourned as a mark of respect to those lost in the calamity. Few wrecks have been as appallingly sudden as that of the Drummond Castle.

Unsuccessful attempts were made in 1929 to salvage part of the ship’s cargo. A huge rent in the hull was found where the Pierres Verte had ripped open the vessel’s side.

To be continued …passengers on the Drummond Castle