Crossing the Bar at Natal


‘What is this bar you keep talking about?’ asks a perplexed blog visitor.
Well, it’s not the Three Anchors pub down by the docks, me hearty.

If I’ve been less than clear in previous posts about Durban harbour, the Bar refers to the sandbank across the entrance channel to the port. Someone of more technical ability than myself describes this phenomenon (by no means limited to Durban, see below) as follows:

A harbour bar is a sedimentary deposit formed at a harbour entrance by the deposition of sediment or the action of waves on the sea floor or adjacent beaches. A bar can form a dangerous obstacle to shipping, preventing access to the harbour in unfavourable weather conditions or at some states of the tide.

The mouth of the Buffalo River, which forms the harbour of East London, also had a bar across the entrance. Retaining walls were constructed to narrow the channel and increase the tidal scour. A breakwater was run out in the form of an arm to prevent the sea checking the river's flow and driving the sand back upon the bar. Also, the use of dredgers enabled clearance of the river channel so that vessels of large draught would be able to enter.

Much the same procedure was followed at Durban, over many years, to try and solve the problem of the bar. For more on the history of this aspect of the port, read Allan Jackson’s article, the Battle of the Bar, at http://www.fad.co.za/Resources/dhew/bar.htm

From the family historian’s point of view, the difficulties posed by the bar had a direct impact on ancestors arriving by ship. At Port Natal, the settler ships of the Byrne era (late 1840s and 1850s), though of shallow draught in comparison with later giants of the steam age, usually had to anchor out in the roadstead several miles from shore. This in turn led to several shipwrecks – including that of the Minerva, during which all the immigrants’ possessions were lost. A more bleak start to life in the new Colony can scarcely be imagined. Such events inevitably affected the fortunes and futures of our ancestors.

Even in later years, shipping columns repeatedly show that at the end of a voyage passengers had to resign themselves to delays, waiting outside the port until wind and weather made it possible for them to be transferred (by basket) to a tug or other harbour craft to carry them to land. We may find that an ancestor arrived at Natal on 26 February – but that he actually set foot on shore on 1 March: which do we choose as his date of arrival? 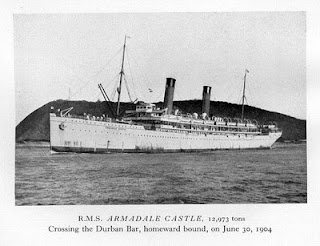 At Durban, by 1904 as a result of continued dredging operations 33 million tons of sand had been shifted. On 26 June 1904 the Armadale Castle was the first mailship to cross the Bar and enter the harbour. She was the flagship of the Union Castle Line (Union Line and Castle Line having amalgamated in 1900) weighing in at nearly 13 000 tons and with a draught of 7, 6 metres.

This historic crossing marked the end of the basket-landing era. Passengers would be able to disembark by gangplank directly from ship to shore.


And now, a moment of self-indulgence: Tennyson’s poem ‘Crossing the Bar’, extracts of which appear on numerous mariners’ headstones:

Sunset and evening star,
And one clear call for me!
And may there be no moaning of the bar,
When I put out to sea,

But such a tide as moving seems asleep,
Too full for sound and foam,
When that which drew from out the boundless deep
Turns again home.

Twilight and evening bell,
And after that the dark!
And may there be no sadness of farewell,
When I embark;

For tho' from out our bourne of Time and Place
The flood may bear me far,
I hope to see my Pilot face to face
When I have crost the bar.