If you believe your ancestor travelled to South Africa by ship during or after 1890, your best bet for further information is to search findmypast.co.uk Passenger Lists under the Travel and Migration section of the site.

Not only can you search by surname, but also browse by name of ship. This may be the answer to a recent blog visitor’s query re the Grantully Castle’s movements in 1896. The Grantully Castle made three voyages between England and SA in that year, departing from Southampton in March, May and October. Further exploration – under passengers’ names - on findmypast should prove rewarding. 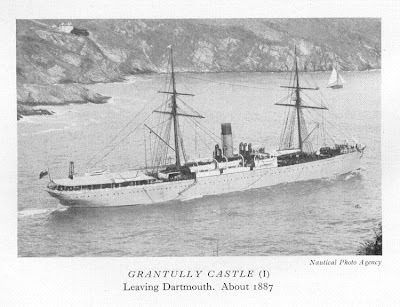 This ship was the first Grantully Castle, 3454 tons, built in 1880 and a sister ship to the first Kinfauns Castle. In December 1896 Grantully Castle ceased her work in the Cape service and was taken over by the Booth Line, with her name changed to Augustine, which doesn’t have quite the same ring to it. However, she traded between Liverpool and South America until 1912 before ending up in the breakers’ yard. Grantully Castle (2), 7617 tons, was built in 1910 – by Barclay Curle, Glasgow, as was the case with Grantully Castle (1).

Passengers travelling from England to South Africa in the early days of the Union and Castle Lines had various options as to port of departure. Union HQ was at Southampton, from where the steamer would leave for the Cape, with a stop at Plymouth for the mails. The Plymouth call ended in September 1888, ships then calling at Lisbon instead where late mails, sent overland via Paris, were taken on. A sleeping-car service was arranged between Paris and Lisbon. The arrangement for the mails at Lisbon came to end in 1891.

Currie Liners, based on London, made a stop for some hours at Dartmouth after leaving the Thames. This route was more popular than that of the Union Line because it provided a pleasant visit to the beautiful estuary of the River Dart. The fortnightly departure of the Donald Currie Steamer from Dartmouth was an event, bringing business to the small port – shore-visiting passengers from London as well as arrivals by rail who were to join the ship at the river.

By June 1891 the Currie steamers changed their route, departing from Southampton instead of Dartmouth, thus ending the latter port's golden era.  It was only after the amalgamation of the Union and Castle Lines in 1900 that all mail steamers were finally based on Southampton.