Wreck of the Fascadale: a heroic rescue 1895 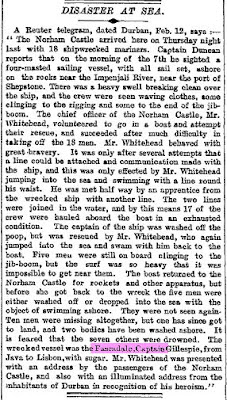 The Fascadale, a steel barque of over 2 000 tons built in 1890 by A Stephens & Sons, Glasgow, foundered on rocks south of Port Shepstone on 7 February 1895. According to some accounts, she was on her way from Java - where her captain, B J Gillespie, had been left behind due to illness - carrying a crew of 28 and a cargo of sugar. The incident is notable for the heroism shown by those involved.


Under the headline 'Disaster at Sea', The Times (London) reported on 1 March 1895 that the Norham Castle had arrived at Durban with the news that a four-masted sailing vessel, with all sail set, was sighted ashore near Port Shepstone on the morning of 7 February:

'There was a heavy swell breaking clean over the ship and the crew were seen waving clothes, some clinging to the rigging and some to the end of the jib-boom. The chief officer of the Norham Castle, Mr Whitehead, volunteered to go in a boat and attempt their rescue, and succeeded after much difficulty in taking off the 18 men. Mr Whitehead behaved with great bravery. It was only after several attempts that a line could be attached and communication made with the ship, and this was only effected by Mr Whitehead jumping into the sea and swimming with a line around his waist. He was met half way by an apprentice from the wrecked ship, with another line. The two lines were joined in the water, and by this means 17 of the crew were hauled aboard the boat in an exhausted condition. The captain of the ship [i.e. her First Mate who was in command at the time] was washed off the poop, but was rescued by Mr Whitehead who again jumped into the sea and swam with him back to the boat. Five men were still on board clinging to the jib-boom but the surf was so heavy that it was impossible to get near them.

The boat returned to the Norham Castle for rockets and other apparatus but before she got back to the wreck the five men were either washed off or dropped into the sea with the object of swimming ashore. They were not seen again. Ten men were missing altogether, but one has since got to land, and two bodies have been washed ashore. It is feared that the seven others were drowned. The wrecked vessel was the Fascadale, Captain Gillespie, from Java to Lisbon, with sugar. Mr Whitehead was presented with an address by the passengers of the Norham Castle, and also with an illuminated address by the inhabitants of Durban in recognition of his heroism.'

Frank Whitehead, chief officer of the Norham Castle (later Captain Whitehead), and the Fascadale's apprentice, Robert P G Ferries, were subsequently awarded the Board of Trade medal for bravery at sea. Sergeant C R Ottley of the Natal Police also received a bronze medal for his contribution in saving the lives of crew members of the Fascadale.