The Alexandra Mounted Rifles: this corps was formed in 1865, with the aim of covering the area from the Illovo River south to the Umtamvuna River and inland for 50 miles. Organised in three troops, its strength varied from 70 to 130.

According to G T Hurst*, the unit adopted khaki for its field service uniform in 1874, apparently the earliest recorded use of that colour for military purposes in South Africa. [A possible exception is the 2nd Highland Light Infantry (74th Highlanders) who in the 8th Frontier War 1850-1852, fought in doublets of that colour.]

Their badge was the monogram A.M.R. surmounted by a crown and worn on the front of the white helmet. There is no record of the unit adopting a motto or collar badge. Members were armed with the Terry and Snider carbine up to 1875, officers carrying swords. Later the Terry and Snider carbine was replaced by the Swinburn-Henry carbine, with bayonet - another unique distinction for the unit as this was the first occasion on which the bayonet was used with the carbine. It proved unsuccessful and was discontinued. Members provided their own horses and saddlery while the Government supplied arms, ammunition, some field equipment and an annual grant to each member for maintenance of his horse.

On formation, Major W J Dunbar Moodie was Commanding Officer; others who followed were Capt W T Arbuthnot, Capt Frank U Reynolds and Capt Fitz-James Arbuthnot, all from the Umzinto area.

In 1873 a detachment of the AMR joined the force under Capt Harry Escombe, accompanying Theophilus Shepstone to the Coronation of Cetewayo in Zululand.

In December 1878 the unit, commanded by Capt W T Arbuthnot, joined the invading British force at the start of the Anglo-Zulu War. The following members reported for service:

The unit crossed the Tugela into Zululand as part of Colonel Pearson's Column and proceeded to Eshowe.

The Battle Honour South Africa 1879 was awarded to the Alexandra Mounted Rifles for the campaign. Two of its members were mentioned in despatches for their services in the field.

When the Isipingo Mounted Rifles disbanded in 1880, members of that unit joined the A.M.R. 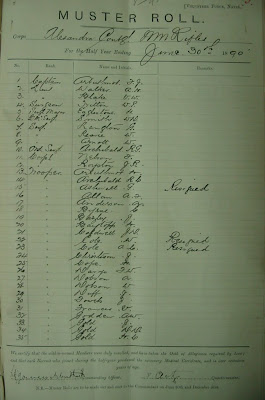 In 1884 the southern portion of the A.M.R. separated from the unit to form the Umzimkulu Mounted Rifles under command of Captain Bru-de Wold. The A.M.R. despite a reduction of numbers continued to function until 1888 when, after 23 years of service, it was absorbed into a larger entity with the amalgamation of all small units on the Natal coast to form the Natal Mounted Rifles. Nevertheless, muster rolls of much later date for 'the Alexandra Contingent of the Natal Mounted Rifles' show the continuity of family names from the Umzinto area: Arbuthnot, Pearce, Langton, Archibald, Smith (William Dixon) Arnott, Royston, Bazley, Gold, Cole and others.