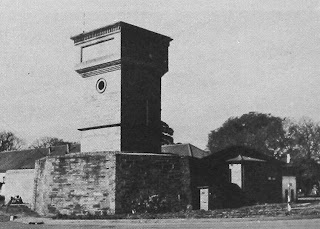 In August 1843 two companies of the 45th Regiment, 1st Nottingham (Sherwood Foresters), with fifteen engineers and several artillery men marched the 52 miles from Durban to Pietermaritzburg in four days. On arrival they occupied a hill overlooking the town and this site was chosen for the construction of a fort to be named Fort Napier in honour of Sir George Napier, Military Governor and Governor of the Cape.

The officer in charge of the garrison was Major Thomas Charlton Smith who had, with his troops, been besieged at Durban in 1842. In 1843 a military cemetery was laid out: some graves date from 1846. Imperial troops occupied Fort Napier from 1843 to 1914, among them some famous regiments.

If it is evidence you need to fill the gap at Fort Napier, I offer this:
21 September 1868: George William Bathe (GWB) enlisted as private No 1711 in 2nd Battalion, 20th Regiment (East Devonshire) at Pietermaritzburg, Natal.

2 Aug 1870: letter from Edgell in Natal “I saw Bathe a month since. He has gone with the Regt to the Mauritius.”

Hi, how do i find out more about the 75th regiment stationed at Fort Napier? My great great grandfather was there until 1875 and stayed on in PMB as a policeman (All from his kids Baptism records). I want to see the 75th movements to see when he came to SA. Can you direct me?

Not shown in listed regiments above: On 16th December 1897, 1st Battalian Leicestershire Regiment, disembarked at Durban and proceeded to Marizburg, wher it was encamped. The battalian HQ stayed there until 18th March 1899 when they proceeded by train to Mooi River to encamp pending their move to Ladysmith. Between times they effected comany manouvers to Eishowe, Zululand in June '88 (including mounted infantry with Argentinian ponies shipped in the previous year) and with half the battalian in the week commencing 15th August force marching with full kit to Ladysmith, returning by train on 3rd September '88. So some serious training for the war ahead! [Source: A History of the Services of the 17th (Leicestershire) Regiment, Lt.Col. E.A.H. Webb.]