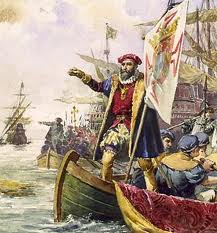 Vasco da Gama, the Portuguese explorer, sailed along the south-eastern coast of South Africa and on Christmas Day 1497 sighted the land which he named Natal in commemoration of the Nativity.

This familiar story is widely accepted as true and, certainly, the name has never been – and hopefully never will be – subjected to change. However, was it really the Natal stretch of coast, as we know it, that da Gama saw from the deck of his ship? Professor Eric Axelson, in various published accounts, has questioned the fact, stating that the Portuguese fleet was further south on that date in 1497, near to Port St Johns.

Professor Axelson based his theory on the distance – contemporaneously recorded as 70 leagues – sailed by da Gama’s vessels between 20 and 25 December. ‘On Christmas Day … the expedition had discovered 70 leagues, so a section of the Transkei coast received the name Natal. Three days later the mariners caught fish off what was probably Durban bluff.’

The many calculations made by Axelson and others in trying to determine precisely which area of coastline was viewed by da Gama’s fleet on 25 December are discussed in an article by Brian Stuckenberg in Natalia v27, Vasco da Gama and the naming of Natal. See
http://natalia.org.za/Files/27/Natalia%20v27%20article%20p19-29%20C.pdf

Stuckenberg remarks: ‘Fortunately, no evidence exists of any error in attribution of the name Natal to our Province. There are instead good reasons to accept that this was indeed the land along which Vasco da Gama … coasted on Christmas Day 1497 … en route to their first encounter with the fabulous Indies.’