Central West Street, Durban circa 1902 showing double-decker horse-drawn tram and rickshas. The clock tower of the then City Hall (now main Post Office, built 1885) can be seen above other buildings at left. The present City Hall was yet to be built (1910): on its site was the Market Square, see treed area opposite the present Post Office. Rickshas came into use in Durban in 1893, electric trams in 1902. 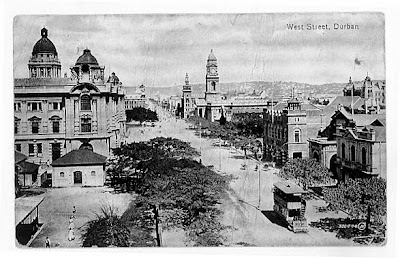 Later ... a view from the opposite direction:

In this postcard the (rear of the) new City Hall is shown at left, dating the picture to post-1910. The old City Hall (now Post Office) is at right in the middle distance. Note the double-decker electric tram in West Street.
Posted by Mole at 7:08 AM