Shipboard diaries, contrary to expectation, can be a disappointing resource for family historians, as passengers were extremely busy either recording their sufferings at sea (their own as well as their fellow travellers’) or completely wrapped up in the novelty of the experience – wind and weather, how much headway the vessel was making (apparently never enough), dolphins, sharks and seabirds spotted en route and crew members or even passengers lost overboard.

Of course, these accounts do give us insight into life on board, its perils and pleasures. If that’s what you’re looking for – a view of the ancestor’s voyage through his eyes, or at least through the eyes of one of his contemporaries – well and good.

All this maritime activity, though, left little leisure for writing about the relatives left behind at home, which would be more use to the inquisitive descendant than reports of  shooting contests held on deck or of larking about throwing message-bottles into the sea. These antics confirm our suspicions that most of the time the passengers were bored to distraction.

A diary written by passengers on a schooner travelling from Glasgow to Port Natal in 1862 reveals that the ship was becalmed for long periods, and was also undermanned. There was much seasickness and when the diarists recovered sufficiently to partake of meals they had to watch fellow passengers throwing up in the dining room – if the nauseous victims didn’t manage to get to the deck rail in time. This can hardly have been conducive to the onlookers’ return of appetite. In the restricted space of such a small vessel, another family (parents with six children) proved irritating company. When not entering comments in their journal, the diarists spent time reading improving literature such as, ironically enough, Milton’s Paradise Lost. There were a couple of catastrophes during the voyage – a damaged topmast which was repaired at sea and a Man Overboard – a seaman, who couldn’t be saved. Despite all, general admiration of the Captain was expressed.

In the remarkable 88 closely-written pages of this diary, almost no mention is made of family members left in Scotland and where names are given references are tantalizingly brief: who can the ‘Janet’ be whose health was drunk in a glass of negus by her relatives on board ship? Naturally, diarists know who they are writing about and usually find it unnecessary to describe the relationship or give a surname, leaving descendants or other readers guessing.

After the foregoing critical appraisal of the value of shipboard diaries in family history research, I must admit that they make enjoyable reading, also that pleasing nuggets of information occasionally emerge. The hunter-traveller-artist Cornwallis Harris, in his Wild Sports of Southern Africa, describes a short coastal trip to Algoa Bay (Port Elizabeth) during the 1830s in detail and not without humour: 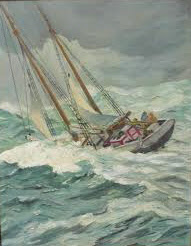 ‘In addition to a mate, a cook [and a] steward, our crew consisted of three men and a boy; our fellow passengers being two adventurers … and a tailor and his wife with nine daughters, some marriageable, some at the breast. This unfortunate family, every member of which was seasick during the entire voyage, located themselves in the steerage, an apartment about eight feet square, ventilated only by the hatchway. The passage up the coast, at that season [July], seldom occupies more than three days, but the fates decreeing that our progress should still be opposed, adverse winds had taken the place of the north-wester, which had been blowing without intermission during the preceding six weeks, and which, had it but continued a day longer, would have wafted us to our destination. The little vessel was usually gunwale under.’


Harris disposes of Port Elizabeth in a short uncomplimentary sentence, remarking that the town was ‘built on the sea-shore on the least eligible site that could have been selected’ but goes on to redeem himself (as far as I’m concerned) by mentioning that he ‘tarried a week at Mrs Scorey’s fashionable hotel’. Mrs Scorey features in my own family history, linked to Mary Ann Caithness who married Captain William Bell; this snippet has led to further discoveries re connections in early Port Elizabeth.

[The Wild Sports of Southern Africa, being the Narrative of an Expedition from the Cape of Good Hope etc by Cornwallis Harris: Full View free on Google books.]

Not many travellers would aspire to writing of their shipboard experiences in verse, but that’s what John Coventry did. An English surgeon, Coventry sailed to Natal from England on the barque Amazon in 1850, later publishing his work Viator, A Poem of a Voyager’s Leisure Hours (London, 1854). The Amazon carried 46 adult passengers and 14 children; they were not government-aided emigrants and this may account for no passenger list having been located so far. Coventry presents an interesting list of items the emigrants considered necessary for their new lives in the Colony, as well as references to their arrival at Natal where the ship was chased out to sea by a storm but later safely landed, after taking on board ‘Port Captain Bell and Archer, the pilot’. (This was George Archer.) Almost the first thing the settlers saw was the wreck of the British Tar lying on the beach, so they must have been relieved that the Amazon, drawing only 11 feet, was able to cross the bar at the harbour entrance without difficulty. Coventry did not settle in Natal but left us an unusual narrative account of his experiences as a traveller in that era.

http://jeffangus.wordpress.com/2012/01/05/william-nicolson-diary/   Diary written on the sailing vessel Lord Clarendon in 1862 by William Nicolson, on a voyage to Natal.
http://www.dpawson.co.uk/william/index.html  A journey to South Africa in 1870 by William Pawson.
http://molegenealogy.blogspot.com/2012/04/under-sail-to-natal.html Extracts from various diaries.
http://molegenealogy.blogspot.com/2012/04/voyage-to-natal-south-africa-1850.html William Lister’s voyage in 1850, taken from his Recollections of a Natal Colonist, written ca 1905.