American missionaries writing from Natal in the 1840s

Rev Aldin Grout's meeting with Umpande of the Zulus in 1840, established amity with the King. The following year Grout founded a Mission Station at Inkanyezi (near Empangeni in ‘the Zulu Country’) where he opened a school.
From Inkanyezi, Charlotte writes in March 1842 to her brother James Bailey in Holden, Massachusetts, telling him that her husband made a further, more recent, visit to Umpande, ‘in order to secure a continuance of the friendly feelings already existing between us’ (i.e. between the King and Aldin Grout). Charlotte, rising to the challenge, makes plans of her own:

I thought it necessary to have a short vacation in my school, and not deeming it pleasant to remain here alone concluded to accompany him. We were therefore obliged to fit our wagon with every thing necessary for ‘housekeeping’ in the open field during about two weeks. Our company consisted of our interpreter and six native children, members of our family, besides Mr. G. and myself. We left one at home to take charge of things … After riding 8 ½ hours since we started we outspanned for the night on the banks of the Insileni river.

Their journey took about four days of hard travelling, much of it in rain and cold. Despite this, Charlotte was eager to meet the King and get sight of what she calls his 'Capitol': 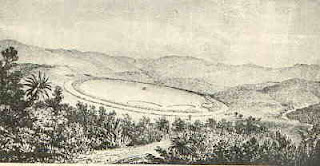 As we approached [the King’s kraal] we saw no rising dome to mark it - no spire of churches or other public buildings - heard no sound of the bell to remind us that time was passing - but merely saw on a small elevation from the Umfolozi river a brush fence enclosing a circle of perhaps four acres. Just within the fence were huts extending around the entire circle, amounting to two or three hundred. The fence is higher than the tops of the huts. There was one entrance perhaps four ft. wide where the cattle passed morning and evening, besides one or two smaller ones. We outspanned outside the kraal …

Most of the inhabitants had never before seen a white woman. Some were amazed at Charlotte's walking alongside her husband, since in Zulu custom wives follow at a discreet and respectful distance. The visitors were conducted past the outer enclosure into the presence of Umpande in the royal hut.


We stopped before the door which was a foot & a half high, supposing he would see us outside, but he insisted upon our coming in. We therefore dropped down, and crawled in as well as we could … As we approached him he smiled and shook hands. We then sat down in front of him. My first object was to view his appearance. The mat was spread on the earth floor & he sat upon it a little elevated from the floor by his pillow which is a block of wood. He had a band of black & pink beads … tastefully bound around his forehead, and his body was comfortably enveloped in a blanket. He appeared to be 35 years of age. He had a native basket by his side containing his snuff box, which was a little squash shell and which he was almost constantly opening to partake of its contents. He had a few earthen dishes standing one side of the room … That was all the furniture in the room … except a pot of burning coals standing at the centre. He conversed on various topics – said he was sorry we came at this season of the year, when he had nothing to give us to eat.

The remainder of the Grouts’ visit passed peacefully enough that weekend, the King presenting them with a large ox before they left on the return trip to Inkanyezi. However, the missionaries’ future remained insecure, as they were well aware. But trouble was to come from an unexpected quarter a few months later.

Charlotte’s letter to her brother remained unposted until mid-June 1842, when she added a postscript in tiny handwriting:


We learn from natives the Eng. have arrived at Natal & taken the Port, with a loss of several killed both on the part of Eng. & Dutch. We feel anxious to hear from our brethren Adams & Lindlay [sic]; it has now been four months since we heard from them.

For more about the conflict at Port Natal to which Charlotte refers above, see: 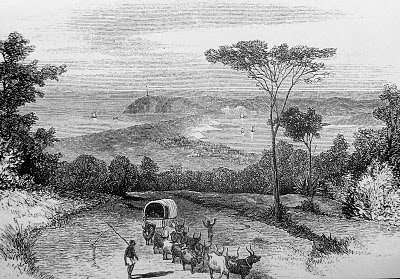 Engraving of Port Natal with ox-wagon in foreground.
Posted by Mole at 6:51 AM