The recent discovery in the US of a previously unknown collection of letters written by members of the GROUT missionary family will lead to this correspondence being published in book form. In the interim, I have permission to quote extracts from the letters. Some necessary background first:

Mission work was frequently a family affair, and the GROUT and IRELAND families are a good example of the inter-connections found in the missionary world. 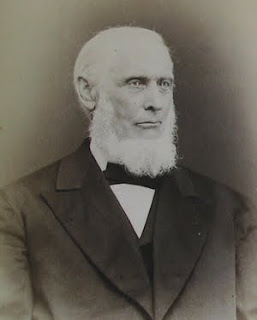 Aldin Grout (1803-1894) was a veteran missionary of the American Board of Commissioners for Foreign Missions (ABCFM). He was the father of Oriana Grout, who married William Ireland, another ABCFM missionary. Grout was born in Massachusetts, US. He married Hannah Davis 1834 and together with other ABCFM missionaries they sailed to South Africa, landing at Cape Town on 5 February 1835. Hannah Grout died in Bethelsdorp on 24 February 1836 and Grout took his daughter Oriana back to America the following year. While there he married Charlotte BAILEY (the writer of most of the newly-found letters and like Oriana a graduate of the Mount Holyoke Seminary) and the couple returned to SA in June 1840. The Mission Station at Ginani, originally founded by Champion and where Grout had worked for a time, had been destroyed in his absence. In April 1841 Grout established a Station at Inkanyezi, Empangeni, and opened a school. (Inkanyezi is Zulu for 'star'.) From 1842 he spent a short while at Umlazi Mission and then to Umgeni station 6 miles north of the Bay of Natal. In 1843 the ABCFM instructed missionaries to discontinue their work in the area. There was a hiatus in his association with the ABCFM in 1844, and he worked in Natal as a Government Missionary for about a year (at 150 pounds per annum) before resuming his position with the American Board in 1845. He founded Umvoti Mission Station in 1846, about 40 miles north-east of the Port and 6 miles inland from the sea; a church was completed in 1863. This Mission was renamed the Groutville Mission Station after its founder in 1878. In failing health, Grout returned to the US in February 1870 after 35 years in Natal. [Note: Aldin Grout was not related in any way to another ABCFM missionary, Lewis Grout, who worked in Natal and Zululand.]

William Ireland (1821-1888) of the ABCFM arrived in South Africa in 1849 and succeeded James C Bryant at Ifumi, 35 miles south of Durban. When Ireland’s first wife Jane nee Wilson died in 1862, he took leave of absence in America and while there married Oriana, daughter of Aldin Grout. She had been born in Bethelsdorp, Cape Colony, but her mother, Hannah Grout, had died of consumption when Oriana was a few weeks old. The child subsequently grew up with relatives in America and later attended the Mount Holyoke Serminary, one of the first institutions in the US for the higher education of women. South Africa was Oriana’s inescapable destiny and she was to return there with her husband. From 1865 to 1881, William Ireland was principal of Adams College at Amanzimtoti: Oriana worked alongside him at the station as well as presenting him with seven children, five of whom survived. In 1894 Oriana became principal of the Ireland Home for Zulu girls. Lilla Lacon Ireland their eldest daughter later worked at Adams and at Inanda. Their eldest son, William Fleetwood Ireland, was ordained in the Congregational ministry in 1895.

The American Board of Commissioners for Foreign Missions had its roots in the historic ‘haystack meeting’ of 1806, when four students of Williams College took shelter under a haystack during a storm and while there vowed to work in the overseas mission field. The ABCFM turned its attention to South Africa in 1834 and the following year the first party of missionaries sailed to the Cape in the ship Burlington. They were Daniel Lindley, Alexander Wilson, Henry Venable, George Champion, Aldin Grout and Newton Adams. Wilson and Adams were both physicians. Lindley, Wilson and Venable attempted to establish themselves in King Mzilikazi’s territory but later journeyed to Natal to join their companions. Adams, Grout and Champion arrived in Natal at the end of 1835 having traveled from the Cape by ship due to the frontier war raging at the time. They received a fair reception from Dingane, the Zulu king, and by the beginning of 1838 four stations had been established, but work ground to a halt with the massacre of Piet Retief, the trekker leader.

The American Board suspended their efforts in this area because of the unsettled state of the country, but Adams continued at his own expense, taking up his post at Umlazi again in 1839 and later transferring his operations to Amanzimtoti on the Natal south coast – this was the birth of the renowned Adams Mission.

Lindley became pastor to the Voortrekkers but resumed ties with the ABCFM in 1847 when he founded Inanda mission station north west of Port Natal. Both Adams Mission and Inanda Mission hold an honoured place in the annals of Natal education. By 1850, 15 ABCFM mission stations had been founded and further missionaries had supplemented the ranks of those already in the field e.g. McKinney, Abraham, Rood, Marsh, Wilder and Tyler.

I believe William Ireland (1821-1888) was born in Oswestry, Shropshire, England, the son of Thomas Ireland and Elizabeth Lacon, married March 5th 1816. This Ireland family of Shropshire is related by marriage to Philip Henry (1631-1696) a very influential English Non Conformist clergyman, scholar and diarist who spent many years in Shropshire and left a legacy of families of the County that named their children Philip Henry. William had a brother Philip Henry Ireland, both are 4th great grandsons of the reverend Philip Henry.
My family research into some of these Shropshire families led me to William who must have emigrated, presumably with his family in the 1830s I suspect, but I haven't found any source to confirm when and where they went. Another brother, Roger Ireland (1818?-1898) married in Illinois but settled with his family in Colorado, a farmer and cattle raiser.
I am looking for more information about William and his family in America and was wondering if the collection of letters you mention reveal anything that could help me.
Howard Davies, Madrid Spain.

Hello Howard, thank you for your comment and sincere apologies for the belated response - I've only just seen your message. The collection of letters mentioned are not in my possession, unfortunately, but held by a descendant of the Grout family. Although at one stage there were plans to publish the letters, I have heard nothing further on that score. However, as far as I'm aware, family origins and relationships are not discussed in the letters. They mainly concern missionary work and political events at the time of writing (ca 1850s), with a dash of domesticity from Charlotte Grout nee Bailey. Best Wishes, Mole