George Brown was born in the centre of the City of Hull on 4th May 1817 the son of a sea captain who was lost at sea when George was aged 8 when his ship the “Mary Ann Elizabeth” was on a voyage to Sierra Leone.  From an early age he took up the Christian religion in a big way as his “Log” reveals.  His “Log”, or life story, written in old age at the request, it seems, of his family is an extraordinary tale in several ways;  it tells of long voyages, of shipwrecks, gives great detail of his preaching activities in faraway places but says almost nothing about his family.  The “Log” is attached to this chapter.

He recalls that as his widowed mother had him and his two sisters to support on an income of only £12 a year he had to find work so was apprenticed as a sailor for seven years at the age of thirteen.

In 1840 he sailed as Able Seaman from Hull to America on the “Elizabeth” with no beer or spirits on board for the crew which, he says, was the first instance of a temperance sailing ship out of Hull. He always believed that the presence of alcohol on board was to be deplored and later in life, when a Master, complained that he was compelled to allow it for the crew and passengers.  The story of this first alcohol free sailing was told to me when I was a child as being something of note but with a different slant as it was said that he, as the Master of the vessel, had been responsible for the event.

About 1838 he injured his hand while loading a ship in Hull and was forced to stay on shore.  He was introduced to a Captain Thomas Strutt whose vessel, the “Cygnet”, was in the port and who had been looking for a pious young sailor as a crew member.  He made several voyages in her and eventually was put in charge of her by Capt Strutt who was part owner.  On Christmas Day 1841 he married Fanny Strutt, the boss’s daughter at St Hilda’s  Church in Middlesbrough which is where the Strutts lived and where the couple made their home.  His new father-in-law gave them permission to travel as passengers on  their honeymoon to Malta and they sailed off  from Hartlepool two days later.  Fanny was born in 1819 in the tiny fishing village of Flamborough, a remote and out- of- the way spot.  How long the family was there and what Thomas had been doing I do not know, nor can I tell how George and Fanny met and became betrothed.  Originally George had been sailing out of Hull but on joining the Cygnet which was based in the Middlesbrough area he would have spent his time between voyages there.  Having been given command of one of his vessels Capt Strutt must have held him in high regard and a suitable husband for his daughter.  There must also be the matter of his piousness;  he had been preaching in Methodist chapels from a young age which would have impressed the older man who was also a staunch Methodist.   The Census for 1841 was taken in June but there is no record of him so we may assume he was on the high seas.

In 1843 they had a son, George Thomas, born in Middlesbrough but the family was soon in Hull where Joseph was born in 1849 followed by William in 1852, Fanny in 1854 and Mary Ann Strutt Brown in 1860  The Census of 1851 describes George as a Mariner but in fact he could have been recorded as a Master Mariner as in January that year he had obtained his Master’s Certificate.  They were living very close to Hull Docks in Mary Ann Buildings at 20, Osborne Street but these houses no longer exist as they probably suffered damage during the War.  At this time young George Thomas was staying with his grandparents Thomas and Frances Strutt in Stockton Street, Middlesbrough.

In 1861 he and Fanny are lodgers in a house in Tower Hamlets, London, but the name of the street is illegible. The house must have been a large one as there were 14 occupants consisting of several families and lodgers.  Tower Hamlets is close to the north bank of the River Thames and the Docks so it is possible that Fanny had made her way there to be with her husband while his ship was in port.  By then there would have been a well  established rail service from Hull.  In this year George and Fanny’s  children Joseph, William and Fanny were  with their grandparents in Eston Lane Normanby which is now a part of the conurbation of Middlesbrough.   Their son George Thomas was absent as he had already started his sea-faring life.  It was at about this time that George was persuaded to leave Hull to live closer to his wife’s parents who were becoming elderly.

We find Fanny Brown and her daughter Fanny now aged 17 in 1871 living with Thomas and Frances Strutt in the High Street in Eston.   George and his son George Thomas are away at sea;  I do not know where William was but their son Joseph had died in 1867 aged 18 and is buried in the cemetery at Tower Hamlets in London.  I do not know the circumstances of his death but is curious that a few years earlier his parents had been staying there.

While on a homebound voyage from Mauritius in 1879 George had a serious illness from a “fever” and on arrival at St Catherine’s Dock, London, now in his sixties, he decided to give up the sea after nearly 50 years.  Thus, in 1881 in his retirement, he and Fanny  are still living in the High Street in Eston but  in the house next door to Fanny’s parents.  The house where Thomas and Frances had occupied seems to have been a large one as several members of their family had been living there;  is it possible that, as both couples were elderly and children and grandchildren had gone their own way, the house had been divided in two.

Frances Strutt died at Eston on 27th December 1883 aged 87 and Thomas died there on 25th February 1886 aged 92.  They are buried together at Eston.  The 1891 Census tells us that George and Fanny were still in Eston living at No 19 Cleveland Street which was a modest four-roomed house and he is described as a retired master mariner and local preacher.  Captain George Brown died in 1899 aged 82; Fanny Brown died in 1911 aged 92.  They are in the same grave as the Strutts.

We have seen that George’s son Joseph died in 1857;  son William died aged 55 and is buried in East Ham in London.   I do not know what happened to his daughter Fanny.  George Thomas Brown is the subject of a separate chapter as are the Strutts.

In his Log George records his voyages to South Africa.  I have found a William Strutt, Master of the vessel “Dane”, who was engaged in the same trade at the same time in the 1850s.  I do not know who this William is;  Thomas Strutt had a son, Thomas, who became a Master Mariner so perhaps William is another son whom I did not find.  There are very many sea captains in these stories ! 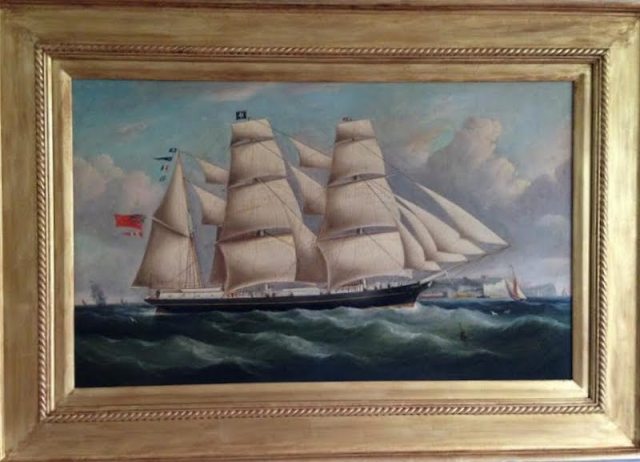 The clipper barque Priscilla (Captain George Brown) which brought my own great great grandfather, Thomas Alfred  Gadsden, to Natal in June 1863. The Priscilla, one of the earliest of the White Cross clippers (others were the Silvery Wave, the Verulam, Isabella Hartley and Burton Stather) was a frequent visitor to the Colony during the 1860s and 70s.

Hello - mention is made of "George Thomas Brown is the subject of a separate chapter as are the Strutts". I cannot find this - very interested to know if the son is the George Brown who was master of the Malda (among other vessels in the 1880's).

Is this what you wanted, Jon?