Arrival of Jane Morice reported in The  Witness 11 July 1851

The barque Jane Morice, 256 tons, under Joseph Browne left Liverpool on April 9 1851, arriving at  on July 7. Her 44 passengers on this voyage included Joseph and William Royston and their families, and Alexander Lyle. John Galloway was making a return trip to , having first arrived in 1848 and establishing himself as a cotton planter. It was this ship which, in 1855, carried Bishop Colenso’s missionaries to . 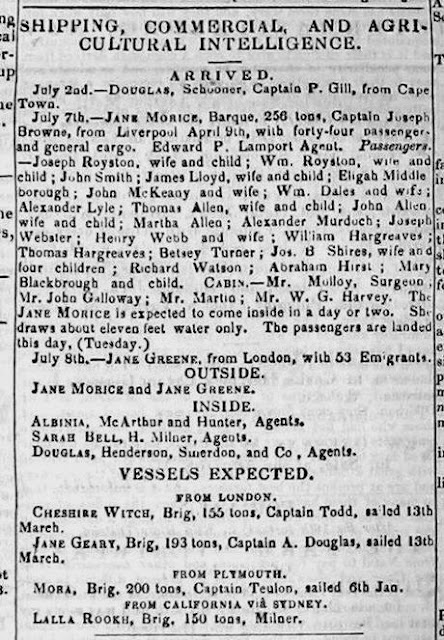 The Jane Morice is expected to come inside in a day or two.
She draws about eleven feet water only.*
The Passengers are landed this day, (Tuesday.)

OUTSIDE
Jane Morice and Jane Greene.

*A reference to the difficulties arising due to the Bar (sandbank) at the entrance channel to Port Natal: ships would have to wait until there was sufficient depth of water and wind and weather conditions were favourable so as to cross the Bar without mishap. As a result of these delays, the actual date of landing of a passenger ashore may be later than the date of ship arrival.