In 1907, two Norwegians (Jacob Egeland and Johan Bryde) started whaling off the coast of Natal, with a factory sited below the Bluff in Durban. It was to become the largest land-based whaling operation in the world. Two steam whale catchers were brought out from Sandjefjord in Norway and whaling began on 3 July 1908 when the first whale, a 40 foot Humpback, was brought in to the port. The company was named the South African Whaling Company.
Objections were soon raised about the site of the whaling station, which was then moved to the sea side of the Bluff near Cave Rock, but the penetrating smell of the operations at the factory remained a problem for residents on the Bluff. The station was moved again, towards the South West, where the winds carried the smell in a different direction. Egeland and Bryde's partnership came to an end in 1909. With a cousin, Abraham Larsen, Egeland then formed the Union Whaling and Fishing Company in 1910. By 1912 thirteen whaling companies were registered in Durban. Union Whaling Company came into being in July 1920, formed by Larsen and Egeland who had started the Union Whaling and Fishing Company, and was to last to the end of the whaling era, merging with the Premier Whaling Company in 1954 and operating the largest shore whaling station in the world. By 1960 850 people were employed in the Company. Coastal whaling ended in 1975. 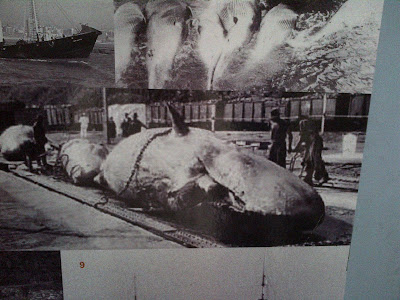 Fascinating history. Reminds me of the SS Waratah case. It was alleged that two weeks after she went missing bodies were seen adrift in the vicinity of the Bashee River. This was disputed in favour of whale offal from the factory in your post. I of course believe they were bodies, but that is another matter. Andrew

It's a long way from the site of the Durban whaling factory to the Bashee River. I doubt if whale offal would have made it intact, considering sharks etc, to be seen as bodies in that vicinity.