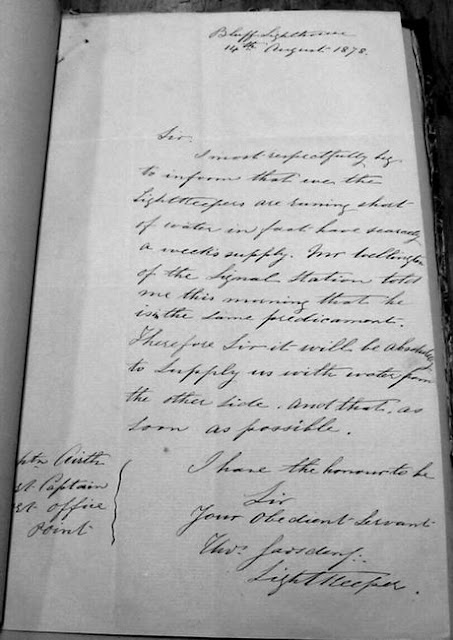 Sir, I most respectfully beg to inform you that the Lightkeepers are running short of water in fact have only a week's supply. Mr Wellington of the Signal Station told me this morning that he is the same predicament.

Therefore Sir it will be absolutely [necessary] to supply us with water from the other side, and that as soon as possible.

I have the honour to be, Sir,
Your Obedient Servant,
Thos. Gadsden, Lightkeeper

Hard to imagine they were so vulnerable. How things have changed.

Yes. It is significant that the following year Thomas's son Phillip was born, to die shortly afterwards - the infant mortality rate was high in Natal largely because of lack of suitable drinking water. Typhoid and other water-borne diseases were rife. When Thomas says water must be fetched from 'the other side' he means from across the Bay, in the town of Durban. The only way of getting up to the lighthouse was by means of an inadequate track initially built in the 1850s by the Gooden brothers
to transport stone for building purposes. One would have to take a boat or lighter across the bay to the Bluff landing place to reach this road.It would have been quite a mission to transport water in casks by this method.