The stately and celebrated red and white Cape Agulhas Lighthouse, built in 1848, is fixed to a rocky headland at the southern-most point of . Here, the Atlantic and meet, often with wild fury, launching themselves at one another in stormy conditions. When the cold Benguela current and the Roaring Forties winds come together with the rising, warm Agulhas current, this collision can become extremely treacherous to seafarers.

Notorious for winter storms and enormous rogue waves reaching remarkable heights, this area became well-known to the Portuguese navigators in the 15th century and drove fear into the heart of every mariner.

Since the days of those early Portuguese sailors, these coastal rocks and reefs where high waves continually batter this windswept, dramatic coastline, have sealed the fates of more than one hundred and fifty ships and many thousands of lives.  It is hardly surprising that numerous wrecks litter this stretch of coast which has earned the nickname The Ships’ Graveyard.

Towards the end of the 15th century Portuguese explorers named this tip of Africa, 'Cabo das Agulhas' which means 'Cape of Needles,’ not as a result of the treacherous rocks and reefs, but, as their wooden sailing ships rounded the Cape, sailors discovered their compass needles would swing about and they were unable to determine true north from magnetic north.

Just to the north-east of the meeting place of the Atlantic and , stand the little towns of L’Agulhas and Struisbaai. In addition to the strong magnetic and intertidal forces caused by the meeting of the two oceans, other influences exist in this area. At the town entrance to L’Agulhas, along the curve of the road, lies a sheltered bay named Spookdraai (Ghosts Corner!)

It is said that the ghosts of drowned sailors or unfortunate castaways have been seen regularly wandering the coastline. Legend has it that on windswept nights the singing calls of sirens can be heard luring sailors and their ships towards the jagged rocks and foaming seas.

P-J Hannabus tells us an intriguing story of when his father, Lighthouse Keeper, Babsie Hannabus, stationed at Cape Agulhas Lighthouse in 1954, had his own personal experience at Spookdraai.

It was a well known local story that in bygone times a ship had foundered in the bay and only one person, a young woman with beautiful slender hands and the voice of an angel, washed up alive at the . She managed to find her way to a cave in the mountains, but most unfortunately, having survived drowning, later died there.

'My parents, Babsie and Eunice Hannabus, one night in May just before I was born in June, were driving home to the lighthouse from Struisbaai. There is a three metre drop to the beach as one takes that last left hand curve before entering Agulhas, when Dad suddenly swerved and their Ford ended up on the beach and fortunately on its wheels. My sister Nerene said our parents would never entertain any discussion about this incident. Perhaps Dad swerved to avoid the ghost with the beautiful hands and the fact that our parents remained silent, did make us ponder!'

Legend has it that this friendly lady ghost will step out and greet people on Spookdraai when she feels lonely.  It is understood that she sometimes seeks the company of friendly folk overnighting in guesthouses too!

P-J reminds us too of the story of De Hoop Manor House, north east of L'Agulhas, which is one of the historic homesteads dating from 1872. Above the gabled front door, is the shell of an oyster, which relates to the following tragic events.

Misfortune struck a newly-wed couple who had bought the beautiful Manor.  One morning, Mr Cloete brought home from the sea, a large oyster to present to his bride for a special breakfast. Unfortunately, Mrs Cloete choked on the oyster and could not be revived. Mr Cloete absolutely heartbroken and distraught took his own life. Word continues to circulate that Mrs Cloete’s ghost is said to wander around at night, always at low tide, looking for and gathering oysters…….

And of course there is also the story of the headless man who wanders around the Spookdraai area!

P-J Hannabus ends off by saying; 'I'll take my chances with the lady, for sure, but go to bed and lock your doors after sunset in L'Agulhas, especially at full moon!'

Note : Tourists can take a short self-guided Spookdraai Hiking Trail, a
circular route, which includes that sharp curve in the road! 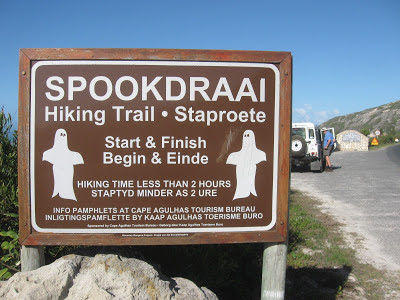