The Woodchoppers and the Solicitor: Lost at Sea 2

Winter had come to the Southern Hemisphere and when the Waratah put to sea on 7 July from for the Indian Ocean crossing to , storms at sea were now commonplace for shipping in these lower latitudes and much heavy weather was expected. It had already been noted by some passengers that soon after leaving the weather had become rough, as forecast, and it seemed that the Waratah rolled in a very disagreeable way, remaining for a long time on her side before recovering. While she was recovering and the deck became horizontal, she often gave a decided jerk.

Good time was made and the Waratah reached Durban nineteen days later on Sunday, 25 July 1909, disembarking approximately 29 passengers, one of which was Mr Claude Sawyer, an engineer and experienced sea traveller who had embarked in Sydney. Sawyer felt unease about the ship and convinced that she was top heavy and would not reach her destination. During the Indian Ocean passage, he had been plagued by disturbing dreams and foreboding premonition and so strongly did he feel about these omens that he decided he would forfeit his onward passage money to and wait for a berth on another vessel.


During the voyage from Adelaide, Sawyer had tried to convince John Ebsworth, Agnes Gosse Hay, Miss Lascelles and several other passengers, to leave the ship with him. Mrs. Hay haughtily disregarded Sawyer’s concerns and despite the fact that she was travelling with all her jewels, retorted that no ship would dare sink with her on board. Mrs. Hay was no stranger to the Waratah, having sailed with Captain Ilbery previously and had made several return voyages to England with him when he commanded the Geelong, sister ship to Waratah. Mrs. Hay was unconvinced and was determined to continue her journey.

Edward Harewood Lascelles, father of Miss Laura Lascelles, the widely-known and highly-respected business partner of the largest wool and produce business in the Western District of Victoria, would have wished desperately that his daughter had taken Claude Sawyer’s advice and disembarked in Durban.

Waratah offloaded some of her Australian cargo, replenished her coal bunkers, took on additional cargo and embarked her new passengers ready to depart for Cape Town and then onwards to London. Amongst her 40 passengers embarked from Durban was David Turner travelling with his wife and five children aged between 3 and 14 years old. Turner was the founder of the well-known and still-thriving South African business, Turner’s Shipping. The loss of this entire family underlines the heartbreak visited upon so many people after the loss of the Waratah.

On Monday, 26 July 1909, at 8pm from ‘C’ Shed, SS Waratah put to sea for the last time. As the ship turned south past Durban Bluff heading for Cape Town none on board would have believed that they would be sailing to their deaths.

Early the next morning whilst off the Transkei Coast at Cape Hermes at about 6.30am on 27 July, Waratah overtook a cargo ship and her last communication by signal lamp was with the Master of the Clan Macintyre at Latitude 31.36 degrees South, Longitude 29.58 degrees East. With a very heavy storm blowing up from the south, the crew of the Clan MacIntyre could see the Waratah making her way ahead, until she was opposite the estuary of the Bashee River. The weather had been deteriorating quickly and the south westerly gale was now gusting to 50 knots.

The platform was set for one of the greatest sea mysteries of all time …the passenger and crew lists give us a glimpse of a heart-wrenching human story. An account of regular people proceeding with their everyday lives with plans of business, sport, courtship and private arrangements that would never eventuate. 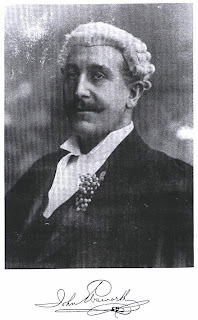 John Ebsworth was primarily on business connected with his law office in London and also planned to visit his ageing mother, ironically, for the last time, as he had decided that he would not return to England henceforth. John would become a figure of fascination to his descendants – a man who had spent many years at sea and a successful solicitor in Maritime Law. As a specialist in these matters, he had written and published a handbook titled, ‘Law Relating to Master and Seaman and Claims for Salvage’, and now, years later, he was to be lost at sea as a passenger.

A month after the ship’s disappearance, his wife Sarah Jane received a letter from her husband, which he had written en route from Adelaide and entrusted in Durban to the Master of a Collier, the Bannockburn, bound for New South Wales, Australia, for delivery to his wife.  In his letter he had stated that, ‘The Waratah was a fine sea boat and as comfortable as one could wish for, while the cabins are splendid ... the passengers are well now, having recovered from their sea sickness and apart from a very rough night at sea experienced on 12 July, the Waratah had behaved admirably.’  The letter stated that on the day before the Waratah’s arrival in Durban, the vessel had logged 333 miles, a record for the passage.

Not wishing to worry his wife, John had neglected to mention however, that not all passengers shared his good opinion of the ship and that Claude Sawyer had sought her husband’s advice being concerned that his bathwater remained at an extreme angle for too long when the ship was on a roll. Sawyer also said the ship was top-heavy and unstable. Together they had gone to look at the way the vessel was pitching from the forward end of the promenade deck. As big rollers came towards the ship, the Waratah took the first one and when she went down into the trough of the next wave, she remained there and seemed to keep her nose into the wave and simply plough through it. John Ebsworth could not have been concerned, or surely he too would have disembarked at Durban.


A series of guest blogposts by S J L Patterson in commemoration of the SS Waratah July 1909.

Hi,
I note you have a photo of 'Claude Sawyer' on this post. I am keen to track down some proof that this really is Claude Sawyer. Can you tell me where you got this image from? This picture seems to appear a lot on the internet but there is never a reference to the original posting.
Thanks!
David