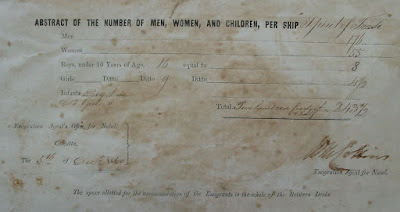 This Abstract shows the number of migrants (men, women and children) per ship Spirit of Trade. Upwards of 240 people - according to recent research perhaps closer to 260 - were on board: 'the Space allotted for the accommodation of the Emigrants is the whole of the Between Decks'.

A British official in the 1880s remarked on 'The limited space, the rude accommodation, the poor and often dirty bedding and clothing, the awkwardness and novelty of the cooking and sleeping arrangements, the strangeness of the passengers to each other, the rough and unclean habits of some and the helplessness of others, and added to all, the discomforts of seasickness ...'.*

The document bears the signature of W.M. Collins, Emigration Agent for Natal. It's dated at Calcutta, the port of embarkation, on 5 December 1860. From Calcutta to Natal the voyages took approximately twelve weeks, slightly less from Madras. By the 1880s the use of steamers reduced the length of voyage to about 24 days.

* [From: Northrup, Indentured labor in the age of imperialism; quoted in Inside Indenture by Ashwin Desai and Goolam Vahed.]