Most family historians with military ancestry are aware that the Soldiers Service documents are classified under WO 97 at The National Archives, . In this series are attestation (formal confirmation of a recruit’s enlistment) and discharge papers. These offer the most detailed record of a soldier’s service.

If your ancestor was in the regular British Army and was discharged to pension, the relevant record should be in the Soldiers Discharge Papers, which are grouped according to date of discharge. From 1883-1913 you can search the Discharge Papers alphabetically by name for the entire army. Before that (1873-1882) you need to know which arm of the service your soldier was in – Cavalry, Infantry, Artillery, Engineers – all of which were represented in the field during the Zulu War. And, in the case of the Cavalry and Infantry, knowing the name of his regiment would save time.

If your ancestor’s service papers have survived, they’ll provide a detailed chronology: his age, where he was born, when and where he served and in which battalion of his regiment, whether he was entitled to any campaign medal, his promotions and demotions, his physical description including any ‘distinguishing marks’ (scars etc) medical details, civilian occupation before enlistment, the reason for his discharge to pension and his intended place of residence after discharge from the army. After 1883 documents may offer additional information such as marriage, next-of-kin and children. So – a treasure chest of information which would be a welcome find for any descendant.

But, as always, research could turn up less attractive aspects of an ancestor.

A soldier on my own family tree was among British army regulars – those who had taken the Queen’s shilling – serving in the infantry during the Zulu War. He spent most of his life in the army, enlisting when he was hardly more than a boy, at 16. For numerous young men of the Victorian era joining the army was not so much a career choice as an escape from unemployment and poverty. It may have been jumping from the frying pan into the fire: army discipline was rigid and conditions harsh. This particular recruit did not adapt well: frequently AWOL and often ‘imprisoned’, he was entered in the regimental Defaulters Book 35 times and was court-martialled on 4 separate occasions. He served 8½ years of his 20 years’ service ‘overseas’, including his stint in the Zulu campaign, during which he was ranked Sergeant. This may have been the most settled phase of his existence. When he returned to after the campaign he veered off the straight and narrow, was demoted and left the army as a private. Not everyone was a hero.

The heroes are well-documented, as they should be, but the ordinary soldier has his story, too. Usually he has to wait for it to be told by a dedicated descendant. 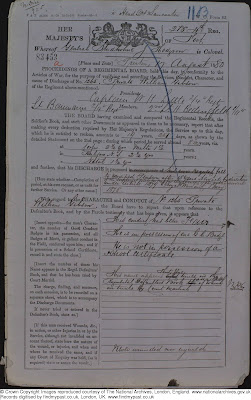