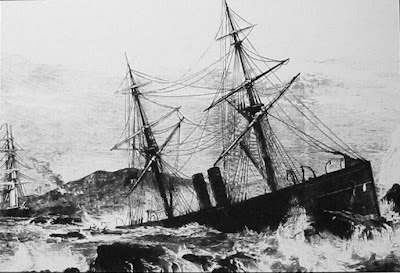 On 14 November 1876 the front page of the Cape Times carried Messrs Jones and Co's advertisement for the public auction that day of "the wrecked steamer St Lawrence ... the vessel will be sold as she lies on the Great Paternosters, with all her Masts, Sails, Ropes, Spars, Anchors, Chains, Engines and Boilers etc ... also stores belonging to the vessel ..."

The St Lawrence, an iron steamer of 2 220 tons, had been under charter to the British Government as a troopship, leaving England for Cape Town some five weeks before the disaster occurred, and passing Madeira on 14 September. She then steamed south until 7 November against strong headwinds. On board were the 2nd Battalion of the 3rd Buffs (3rd Regiment of Foot), and though statistics vary in contemporary reports, passengers numbered over 400 men, women and children, many of the officers being accompanied by their wives and families. There was also a crew of 67 souls. In her hold were a thousand pounds worth of Government stores, including 9 mountain guns and fifty pounds of gunpowder.

Her captain, HYDE, was not well and lying fully-clothed on his bed when at 3 a.m. on the morning of the 8 November his chief officer, SHELTON, reported to him that the morning was fine and that land was in sight afar off. A few minutes later the officer returned to say that the land was not as distant as he had initially believed and that he had seen a light on shore (this later proved to have been a star). The captain immediately went on deck, and, the look-out reporting something ahead, Hyde ordered the instant stopping and reversing of engines. It was too late: the ship struck the reef and her bow firmly settled down, water rapidly filling her compartments.

Hyde reported to the colonel in command of the troops that the ship was ashore and that the men should go to quarters while the crew cleared away the boats. All was done speedily and calmly, with no panic or confusion; the women and children went into the boats first, followed by the men. The passengers were gradually landed safely, and the boats returned to the ship to take off provisions - beef, bread and water. A Captain WYLDE was commissioned to ride for Cape Town with news of the wreck; his journey was accomplished in eighteen and a half hours. Meanwhile, courageous attempts were made by captain and crew, who remained on board, to re-float the ship by setting her sails and reversing engines at top speed, but it was clear that she could not be saved and would eventually become a total wreck. 100 tons of coal had been thrown overboard in an effort to lighten the ship. Sails were sent for use as tents on the barren shore, arms, ammunition and baggage were taken off, and the crew, with provisions and blankets, were at last ordered to the boats which were made fast to the stern of the vessel.

When Wylde's report was received at the Castle, the news was telegraphed to the Naval Authorities at Simon's Bay, and the Spitfire and Spartan dispatched to convey the shipwrecked soldiers and others to Cape Town. Other vessels involved in the rescue were the Donald Currie steamer Koodoo, the steamer Gnu and HMS Active.


REPORTS OF THE WRECK

The Times, London, carried a report of the wreck of the St Lawrence on 6 December 1876. On 13 December, the same paper mentions that the ship had "some five hundred soldiers on board, chiefly from the 2nd Regiment of the 3rd Buffs" - which lends support to the possible presence of members of other units.

An inquiry into the wreck was held, and The Times of 18 January 1877 stated that "the loss of the ship was attributable to a strong north-easterly current. The master is held to be in default for not coming on deck immediately land was sighted ... The fact that land was sighted so much sooner than expected should have made him aware that the ship was much nearer the land than the reckoning placed her. A cast of the lead would have shown him he was on the bank of soundings and the ship would doubtless have been saved. After the wreck he showed great presence of mind and made admirable arrangements for landing the troops and stores. He did not desert her until all hopes of saving her were gone. His certificate therefore was only suspended for six months. The certificate of Mr Shelton, the chief officer who was in charge, was suspended for twelve months."

Of the 50 tons of gunpowder on board, only 10 tons were recovered. The 9 mountain guns and most of the Government stores were lost.