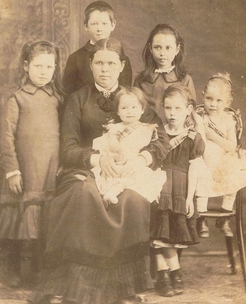 The little girl on the chair, Isabella, later married the missionary John Henderson Soga, son of Tiyo Soga and Janet Soga (m.s. Burnside). Isabella was the grandmother of Hector Soga (see post on this blog 10 September 2011).

Christina Brown (m.s. McKay), was the daughter of George and Christina McKay who sailed to the Cape on the Ascendant in 1859.

Christina Brown's brothers, Donald and Robert McKay, are mentioned in The Outspan by Sir Percy Fitzpatrick (author of Jock of the Bushveld).

David Brown, born March 1840, who married Christina McKay died on 17 Nov 1885. His parents were George and Elspeth Brown. His birthplace was Crail, Fife. He worked as a Transport Rider after his initial start at the Cape. By the time he died he owned property in King Williams Town and 4 Wagons and 60 oxen. 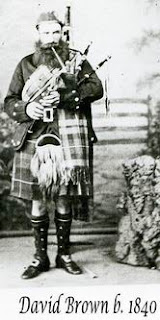 The obituary of David Brown reads:


Yesterday there was taken to his last resting place Mr David Brown, for many years a resident of British Kaffraria; he having come to this Colony many years ago with Mr George Peebles and other 'brither Scots' who are well-known in this community.

The deceased was a native of Pershshire [sic; presumably Perthshire], N.B., and was brought up as an agriculturist and after settling in this colony he took to sheep and stock farming in the Komgha district, carrying on too as his opportunities served him the pursuit of a carrier.

He married a niece of Mr Donald McKay of this town, by whom he had two sons and four daughters.

He was a temperate and industrious man, and those who had transactions with him learnt to know that Davy Brown's word was as good as his bond.

He was a great sufferer in pocket by the depredations made on his flocks and herds by native thieves, and on his last Kurveying trip to Kokstad and on the return journey therefrom was again mulcted, as we took occasion to mention in a recent issue of our paper. His intimates, however, say that Davy took these losses and bore the irritation of them in a very philosophical spirit, remarking to those who spoke hotly about them that they should remember that this was South Africa, intending to convey the meaning that it was unlike any other country.

Mr Brown left on Monday morning last to join at Kei Road his wagons loaded up for Mount Frere and with the exception of complaining of a slight pain between the shoulders seemed in his usual good health.

However on Tuesday morning, Mr George Saunders of Kei Road, an old friend of Davy's, came into town for immediate medical aid, Mr Brown, having been brought to his house during the night by his (Brown's) native servants suffering great agony, and we regret to have to record that those sufferings terminated fatally during the course of Tuesday, the cause being we are given to understand the drinking of some water which proved to be unwholesome and which brought on violent vomiting and purging resulting in prostration and collapse.

Thus death overtook, at the comparatively early age of forty-eight years, a man who was greatly esteemed by a large circle of friends, and to them and to the widow and children we tender our sincere sympathy in the sorrow this swift and severe bereavement must entail. The funeral was attended by the Celtic Lodge of Freemasons and by the brethren of the Order of Odd-Fellows.

[NOTE: David Brown was from Fifeshire, it was George Peebles who was from Perthshire.]
Source: research by Delyse Brown, great granddaughter of David Brown.
Posted by Mole at 5:20 PM