Photography was in its infancy in during the 1850s and remained an experimental art for some years. Outdoor photographs were a late development and it is the carte de visite showing the subject posed in the photographer’s studio, which most family historians will find among their collections of memorabilia.
The corners of the cartes can give an immediate indication of date: square corners were typical of the 1860s and early 1870s, but from about 1875 rounded corners were in vogue.  So when taking a digital copy of a carte de visite it’s advisable not to crop off those vital corners.
The striking couple featured below were photographed ca 1880 by James Lloyd, who describes himself as ‘Artist’. One of ’s earliest photographers, Lloyd’s studio was in operation in . In 1896, and up to at least 1910, he was listed in the Natal Almanac at . He is perhaps best-remembered for his photographs taken during the Anglo-Zulu War, 1879. 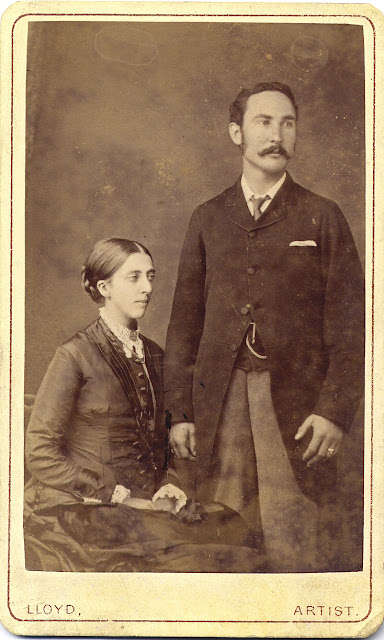 The costume details all point to the early 1880s:  the gentleman’s jacket has a high opening with minimal lapels. Virtually nothing of his shirt can be seen other than the collar and plainly-knotted tie; no shirt-cuffs show at the end of the jacket sleeves. The lower buttons of the jacket are left unbuttoned and the edges are cut and rounded to curve away at the sides, revealing a hint of matching waistcoast with the ubiquitous watch chain. It’s difficult to tell if he has a side-parting but his hair is cut fairly short at the back, a trend which developed by the end of the 1870s and would continue for many decades; he wears side-whiskers and a neat moustache.
The three-quarter length portrait, a trend at that time, prevents us seeing the lower half of this couple’s costume.  The lady’s hair is centre-parted and smooth, worn in a plait coiled at the nape of her neck.  She is demurely dressed in what may be a cuirass bodice with a high neckline, neat tucked detail and straight, fairly tight sleeves, decorated cuffs at the wrist. With her touches of lace and simple jewellery pieces, while perhaps not aiming at the height of fashion, she conveys a pleasing, calm, ladylike aura.
Posted by Mole at 10:59 AM