Lighthouse and the Jolly Rubino

On a densely wooded sand dune, the Cape St Lucia Lighthouse rises 113 metres above the sea.  Erected in 1906, it is one of the oldest lighthouses on the .
Reinforced yet again, is the all-important role of manned Lighthouses and the enormous contribution Keepers have made to the safety of all those at sea. Japie’s recollection involves the loss of the Jolly Rubino whilst stationed at Cape St Lucia Lighthouse.

The Jolly Rubino was a 31,262 tonne deadweight Italian-flagged Ro-Ro vessel, which caught fire off in 2002 and drifted helplessly towards the St Lucia Sanctuary, a proclaimed world heritage site. This caused grave concern to environmental authorities, particularly as her cargo included a range of hazardous chemicals. The Jolly Rubino, en route from to , ran aground just northeast of the Cape St Lucia Lighthouse, where Japie was stationed.

“On 11th September 2002, my wife and I were watching the TV, when news came of a ship on fire just off . I said to my wife, ‘Here comes trouble. That ship will wash ashore close to the Lighthouse and sink.’ My wife didn’t believe me and said that my predictions were wrong and the ship would sink before it reached the Lighthouse.

The next morning I was pumping fuel for the generators when my wife called me and said that the Port Captain was on the phone and wanted to talk to me urgently. I rushed to the phone and the Port Captain told me to be on the lookout for this Italian ship and to closely monitor her movements, because she was drifting in the direction of the Lighthouse!

With a huge smile on my face, I turned to my wife and said to her that she owed me an apology, because the ship was drifting to the Lighthouse! I finished pumping fuel and at 10 o’clock I began to monitor the ship’s movements.

During the course of the night and in stormy weather, the Master, Officers and crew of Jolly Rubino, were airlifted off the ship, but unfortunately the ship’s dog was nowhere to be found.

People began visiting the Lighthouse, interested to see what would happen to the ship, which, by this time, was heading for the beach, just north-east of the Lighthouse, where she later ran aground in adverse weather conditions.

The next morning, the salvage tug Wolraad Woltemade arrived and salvage arrangements were being made. Jolly Rubino’s position was being monitored by the Anchor Handler ‘Pentow Service’ and the oil pollution abatement vessel Kuswag I, remained in the vicinity. 'Kuswag VII' the oil pollution patrol aircraft, regularly flew over the scene.

SMIT Salvage was awarded the salvage contract and I became good friends with the team. It was at this time that my son had just finished high school and the salvage company offered him some casual employment. It was thrilling for him as he and the team were airlifted by helicopter from airfield to the Jolly Rubino.

My wife, our two daughters and I, watched his helicopter fly past the Lighthouse and hover above the ship to offload the team. Suddenly, a heavy duty sack or sugar bag came loose and hit the tail rotor of the helicopter and the helicopter fell onto the deck of the Jolly Rubino and burst into flames!

My wife and daughters were in tears and screaming at me to do something. I immediately reached for the phone and contacted the SMIT team, who urgently contacted a standby helicopter and within 25 minutes all the team members were rescued and flown to hospital.  It was a miracle that there were no fatalities that day.

The suddenness and seriousness of that situation made us realise how short life is and how much all of us take it for granted.”

Undoubtedly, due to the co-ordinated and speedy response to the vessel’s crisis by all parties acting cohesively, potential huge environmental damage was avoided. 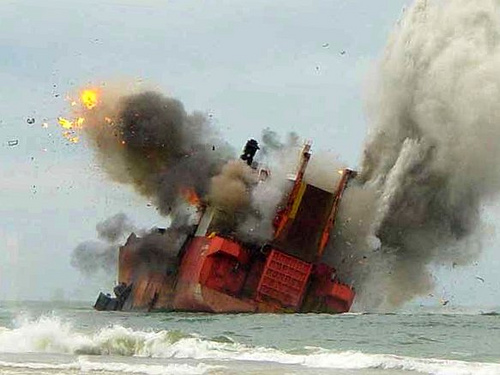 Burnt Bella gets shipshape
The ship’s dog was rescued from the burning Jolly Rubino on Friday by the Smit Salvage Team and is under veterinary care and doing well.

Bella (Italian for "beautiful"), as she is now known, had badly burnt paws and the Veterinarian treating Bella, said that it was a miracle she had not suffocated from the smoke. Staff had washed oil and diesel from her body.

Bella, whose real name was said to be Chicca, was sent back to her homeland and owners, on the sister ship Jolly Esmeraldo, some several weeks later once she had recovered.

Wow! So glad Chicca made it home. Thank you for the thrilling post. Andrew