Why did the ancestors emigrate?

What motivated our 19th c ancestors to emigrate from or from other parts of ? I refer to voluntary emigration, not transportation to penal servitude or escape from religious persecution. Family historians generally accept the standard reason: the wish for a better life. That sweeping phrase covers a multitude of factors including greater opportunities for employment, prospects for personal advancement, perhaps even financial enrichment, a more secure future for the emigrant and his children. Some simply sought adventure.

It’s hardly surprising that they wanted to leave. The population of had grown from 8.3 million in 1801 to 16.8 million in 1851 and, by 1901, had nearly doubled again to 30.5 million: the sceptred isle was becoming a little crowded. ’s population doubled during the 18th century from about 100 million to 200 million and during the 19th century increased to about 400 million. 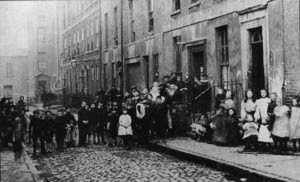 Most of the population in the period after the Industrial Revolution was concentrated in the cities where living conditions for the vast majority of people were poor and diseases such as cholera, typhus and smallpox were rife. But the greatest and most insidious killer of all was tuberculosis which by the late 19th c accounted for approximately 40% of deaths of the urban working-classes. It appears, often disguised by the terms phthisis and consumption, on innumerable death certificates.

My search for something – anything - on an obscure figure in the family tree finally turned up his death record: cause of death, consumption. The date was 1883, only a year after TB was recognised as an infectious disease (resulting from the work of Robert Koch). What was significant was that this person had arrived in not long before he died: clearly his physical condition had played a role in the decision to emigrate. It was believed that removing to ‘a more salubrious climate’ would help. By this stage, however, the disease had taken a firm grip on the man and he died at the age of 37 leaving a wife and six children.

Note: there was no effective treatment for tuberculosis until the development of the antibiotic Streptomycin in 1946. Despite more recent forms of medication, TB continues to kill people worldwide.
See TB statistics at http://www.tbfacts.org/tb-statistics.html