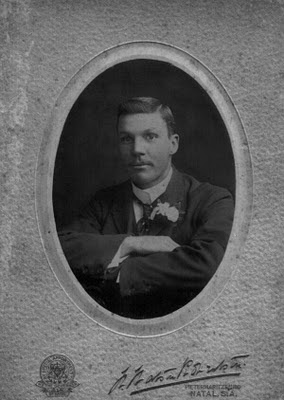 Because men’s costume, i.e. the basic suit, changed very little from about the 1890s to the 1920s, it is sometimes difficult to use this aspect when dating a photograph, especially in a head-and-shoulders ‘window’ view. The dapper young man in this portrait taken circa 1910-12 wears a stiff, fairly high-collared shirt, not turned down at the corners, his tie is soft and loosely knotted. Button-holes (the flowers on his lapel) were popular for special occasions; perhaps this is an engagement photograph. Unfortunately, we can’t see his trousers which by this date probably had turnups (trendy from 1902), and would have been worn slightly shorter than previously and with a knife-edge crease. His hair is fashionably short with a side-parting, and his moustache well-trimmed.

The photographer, William Watson Robertson, operated a studio in , Pietermaritzburg, from about 1898; his success may have been due to his marketing strategies. That he wished his studio to be regarded as an establishment with class is evidenced by a coat-of-arms imprinted on the card mount, announcing that he is photographer ‘By appointment to H.E. (His Excellency) the Governor of Natal’. According to his advertisement in the Natal Almanac of 1908  he is ‘the leading photographer in ’. 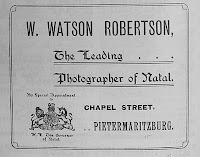 The Watson Robertson studio continued to run until the 1930s, under a new proprietor, Walter Linley.